Making Friends with the Bird

I have gotten a lot out of your audio course, especially the exercises which I use most days, and I’ve had many peaceful moments meditating. And this is what provokes my question.
I’ve noticed in your blog posts you are more like to talk about the bad stuff that happens in meditation than the good stuff. I know sometimes meditation can be difficult but surely if you want to encourage people to meditate, wouldn’t you want to emphasis how nice it can be to sit peacefully and feel refreshed afterwards? After all, isn’t that why people meditate in the first place?

I’m sure you have your reasons. I’m just curious to know.
Thanks, Virginia.

Hi Virginia,
I’m sure you’re right – I could, in my posts, speak more eloquently about the ‘good stuff’, as you call it – the wonderful experiences that can happen in meditation. And believe me, there are a lot of wonderful things that happen, some of them so incredible that one can scarcely believe it’s happening. I could write a whole post describing them – but I’m not going to.

Well, because if I describe all the wonderful things I’ve experienced – if I use these things as a kind of lure to encourage people to meditate, what would it do? It would immediately pique people’s curiosity and get them thinking, ‘I want some of that’.

And let’s say what I have described is so attractive it does indeed encourage them to try meditation – here’s what will happen:

With everything I’ve described in their head, people will try to meditate, while at the same time looking for the good stuff I have described to happen. But the good stuff won’t happen because their expectations will be continually distracting them from the method they’re using to progress.

And when the things they expect to happen don’t, they get disappointed. At which point most people try harder – either that or they start imagining it’s happening. And the harder they try to make the ‘good stuff’ happen, or imagine it’s happening, the more anxious and tense they become.

And the ‘good stuff’ never happens.

It never happens because they are spending all their energy looking, or imagining and trying too hard to get what they want, which creates a very anxious, self-conscious state which totally blocks the moment by moment flow of meditation process.

As a result, two things happen. They either go unconscious whenever they meditate because, caught between what they want and what is actually happening, their mind gets confused and simply shuts down. (Often when this has happened, these people wake up imagining they’ve been in ‘a very deep state’ – but they haven’t – they’ve simply been unconscious.

Or they get so anxious looking for what is NOT happening, their mind never settles, so meditation turns into an excruciating process of waiting for something that never comes, with the end result that they feel like they’ve failed.

But they haven’t failed. It’s simply that their expectations have interfered with the meditation. Rather than using the methods to surf each moment as it is and learning to flow with whatever happens, they’ve been peering into their eyelids searching for some imagined bliss they expect to happen, but which never does. And it totally messes them up.

So this is why I never give details about ‘the good stuff’. I try to avoid describing or discussing meditation experiences with anyone.

As I’ve said many times, the experience you have in each meditation is worth absolutely nothing, nada, zilch … zero!

No matter whether you have a meditation session that is transcendentally tranquil or hideously painful and emotional, it doesn’t matter.The meditation process however it comes, so long as you use the methods, will naturally defragment the mind and relax the body regardless of the experience you have – the result being that when you stand up and walk back into your life, you will be in much better condition than before you meditated.

That’s why we do it.

The other thing is, meditating once or twice a day in the storm of distractions that the typical life is, in this situation the meditation experience (good or bad) will always be very subtle.

So it is that when I go into silent retreat at a temple for a few months and lock myself in a small hut and meditate ten hours a day, the experiences, both of pleasure and pain are very, very intense. And so are the lessons learnt. Meditating this intensively, the progress is extremely fast, and the benefits far greater.

Which is why I strongly recommend you at least try one meditation retreat in your life, at a Buddhist temple, whether local or in Thailand or Sri Lanka.

Or, more conveniently, you can try a 10 day retreat with The Vipassana Foundation at a location nearby, wherever you are in the world. For ten days they will feed you, house you and take care of you while you meditate in silence, with Goenka guiding you – payment is by donation. These wonderful retreats are taught by SN Goenka, a Burmese teacher who I consider one of the most lucid teachers of Vipassana in the world. Though they teach a different method to the one I teach it is extremely effective.
They have centers all over the world, so there will almost definitely be one close by. Just have a look on their web-site HERE, where you can also make a booking. If you’re interested in either of these options or have questions, email me or leave a comment.

Now my last comment on this question will take the form of a parable. I like to think of the things that happen in meditation – the ‘good things’, as being like a bird landing on my shoulder:

Once there was a man who was in love with a small bird that used to visit his garden. He desperately wanted it as a pet. He used to imagine this bird and he living in friendship, looking out for one another each day and playing together.

So he decided to catch this bird. He got a net and next day he waited, and when the bird appeared he chased it all over the garden – but it avoided his efforts and flew away.

Next he built a trap in the garden, a box balanced on a stick with a pile of breadcrumbs as bait. With a string attached to the stick he waited and waited, but the bird never came. And when it did it wasn’t interested in the breadcrumbs – it liked the berries on a nearby bush

This gave him an idea – next day he sat on a bench with his hand held out with a small pile of the berries in his palm. The bird came and, settling on a branch, contemplated the berries, but flew back to the bush and at those ones instead. Exhausted by his efforts and totally demoralized, the man threw the berries away.

He decided to give up trying to catch the bird.

The next day the garden was bright with sun – the man no longer cared about the bird. He just sat in the shade and enjoyed the day. For a long time he sat, absorbed with little things – the breeze on his face, the patterns of sunlight on the wall of his house, the bees buzzing around flowers, his thoughts and memories as they came and went in his mind. For hours he sat, absorbed in the coming and going of little things around him – his body still, his mind in flow with everything happening in him, and around him.

And suddenly the bird landed on his shoulder.

Filled with joy, the man reached up to grab it – but it flew away and once again the man was filled with frustration.

So, once again he decided to stop – to give up trying to capture the bird.

The next day he came into the garden and, like the day before, he sat in the shade to enjoy his day – watching a trail of ants busily bustling over the grass, bright colored flowers bobbing in the breeze, the sensations of air on his skin.

And once more he was surprised when the bird landed on his shoulder.

This time the man didn’t try to grab the bird. He stayed still. Without the man grasping at it, the bird sat down and made itself comfortable.

The man felt great joy. And from then on, he did not wait for the bird, or try to capture it – he simply allowed it to come when it came, and then to go when it chose.

In this way the man and the bird became friends. 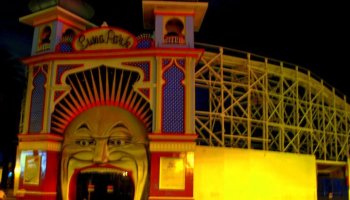 ← Neuroplasticity and Meditation
The World of Worry →