The Illusion of Habits 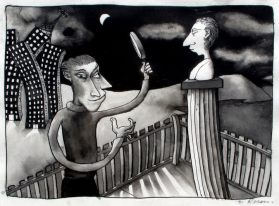 In the audio course you keep asking us to let go of expectations in meditation.

But I’m not sure it is possible to stop my mind looking for some kind of result.

You see, I suffer with depression, and I desire to be without it.  This is my expectation.  I meditate with that purpose in mind.  I desire that outcome.  So I’m not sure I understand when you say don’t look for outcomes, when I just can’t help it.

Isn’t it a normal reaction to desire things. To desire calm, or tranquility from meditation?  Or to be without pain?

First off, it is a normal to desire outcomes – that’s basic to living.  Without desire we wouldn’t be bothered even taking a breath.  The Buddha himself meditated with a driving desire to be free -in his case,  to be free of desire itself.

So the noting is not there to stop anything.

So take it easy and accept your desire for relief from depression.  Accept that when you meditate, you desire tranquility and so on.

Accept it because in the very moments desire is here, that is what is happening.  So that is the main object … even if only for a short while. When desire, or any habit has arisen, there is nothing else – so note that it is happening, then let it go and bring your attention back to the main object.

This is letting go.

So let’s review what you’re doing when you note things in meditation.

When you note something you are doing a number of things:

1   You are signifying acceptance of whatever is happening now – in your case, acceptance that the mind has lapsed into expecting some imagined outcome.

2   You are using the note to cut away your reaction to what is happening – and the result is, though the habit of looking for an outcome has temporarily hijacked the mind and body, with the lack of any reaction, it will fade away.

So whatever happens in meditation – whether it’s looking for an outcome, or pain, or pleasure, desire, fear, worry, sleepiness, anger, sadness, anticipation, remembering … anything –  do not try to stop it – allow it to exist, while at the same time suspending your participation by noting it, then take the attention back to the main object.

The result is, whatever arises in meditation passes away, because you are removing the reaction it needs to sustain itself.

And the mind witnesses the truth that nothing is permanent.

It experiences the reality that habits depend on reactions to exist, either of desire or aversion.  Without those reactions, the mind sees, over and over again, that habits fade away.  And that is a very powerful lesson for the mind to learn, because over time you realize you are not a pawn of your habits.

Now, you mentioned depression, so lets take that as an example – I’ll tell you a little about my own experience with it.

When I was in my 20’s I also used to suffer from depression, which was becoming more and more intense as the years passed.  I suppose today there are many terms for what I had, though I still can’t figure out what it was – perhaps manic depression, clinical depression, whatever.  I don’t know – I suppose ‘chronic depression best described it.

The way it went was, quite regularly, for no reason I was aware of, a terrible heaviness would come over me and I’d feel like death.  I hated this feeling so much, because it closed me up.  I couldn’t talk, my thinking would become confused, and my body would ache.  But the worst part of it, I recognized this state and gave it a title.  When it happened, I’d think, ‘I’m depressed’ – and that would only make me feel worse – much worse. Because it would mean I’d have days, if not weeks of this awful heavy feeling and all the psychic pain that came with it.  It was like a monster with its own will, its own sense of timing, and it’s own mysterious appetite, feeding on me like a parasite, sucking my energy and life.

And the trouble was, I had no idea what it was other than the title I’d given it – ‘depression’. And I had no idea how it worked, or why it came. All I knew was every so often it appeared out of nowhere and wrecked everything.

I tried all kinds of ways of self medicating – alcohol, drugs – but as I got older, the habit of depression only got worse, until eventually it seemed as if it had taken over my entire life – at which point I began contemplating suicide.

It was around then that I began meditating, and eventually found myself in a monastery in Thailand, sitting in a tiny hut at the back of the compound, meditating day and night. It was my first silent retreat and I was being taught the method of mental noting.

Of course, at some point, depression arose, as regular in its timing as always  – but because there were no distractions, this time it was much more intense than it ever had been before.  I couldn’t get away from it, I couldn’t focus to meditate, or sleep, or do anything except sit in the terrible darkness of it. And so it went for days, until one day as I was sitting bathed in sweat, attempting to meditate yet again, everything changed in an instant.

I wasn’t doing much – just sitting there at my wits end, feeling utterly ruined, noting ‘depression … depression…’ when a sudden shift happened – I went from my usual reactive hating of how I felt, to a detached fascination – and it happened in a moment.

It was as if my mind did a switch from being inside the depression, with the story of ‘I hate this’ and ‘I’m no good because I have this stupid illness’ to being outside looking in and seeing it for what it was – without the story, and without the denotation of ‘depression’.

And what I found was, without the story of ‘depression’ and the usual reactive self pity that came out of it, the actual truth of it wasn’t so bad at all.  I felt the aching and heaviness as a set of uncomfortable sensations in my body, somewhat similar to having a mild flu.  And the thoughts, which from a detached point of view, suddenly seemed laughably maudlin and self pitying – a bit silly in fact.

So I was sitting there noting ‘depression, depression’ and noticing all these things with great interest, when suddenly I realized the word ‘depression’ didn’t actually describe it anymore – it was other words – more descriptive – like ‘heaviness’, tightness, anxiousness, thinking, sadness, anger – all kinds of things – but not ‘depression’.

So I forgot about ‘depression, and started noting all the parts of what was happening  – and as I picked the condition apart it began to change. And very quickly the ‘depression’ evaporated – at least that’s how it felt.

And I felt an intense elation, because I realized that in simply accepting the habit for what it was instead of what I had always made of it, and taking a detached interest in it, I robbed it of the reactive energy it had always fed on.  I had pacified the monster  – the monster I’d always called ‘depression’, simply by seeing it wasn’t a monster at all – but just a set of sensations and thoughts.

With no reactive energy to feed on, the condition faded away more quickly each time, and slowly, as time passed, the habit receded so I no longer lived in fear of it coming.

The result is, though sometimes I might get depressed about things, as anybody does, I no longer experience the profound and ruinous depressions I was used to, which arose for no reason except that they had become a powerful psycho-physical habit.

And my point in telling you all this?

Well, it is this.  Everything, from the depression you suffer from, to the expectation of liberation from it, which you experience as you meditate, happens because the conditions for it have already been set in place.

So you must accept these things.

The only power you have to change is to make the switch from being a participant when they arise, to being a detached observer.

And the method of mental noting is the tool you use to make that switch. 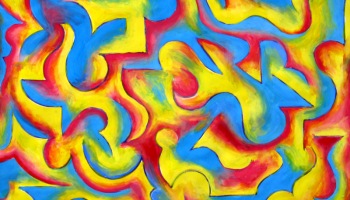 ← Forget Reality … It’s All Fiction
The Many Minds of Mind →

8 thoughts on “The Illusion of Habits”