The Perils of Positive Thinking.

Let’s get it out in the open at the outset. Positive thinking, either as affirmations or visualizations, doesn’t work. And worse than that, these strategies actually have the opposite effect for most of the people who use them.

Ever since Norman Peale’s book, ‘The Power of Positive Thinking’ became a world best-seller in 1952, the popular media have been selling the dubious view that ‘thinking positively’ can improve our life and help us achieve success – and more lately, quack science in ‘The Secret’ has been extending this notion to include the idea that visualizing positive outcomes will cause ‘possibilities to manifest’ at the quantum level, and cause desires to become physical reality.

I remember when I first heard about ‘the power of positive thinking’, back in the ‘80’s, when I was going through a hard time in my life, and looking for solutions.

I was at a new age seminar, and the speaker had spent a whole afternoon linking our thought environment to the very stuff of the universe, to convince us that our thoughts affect reality at the most profound level – the particles and atoms that form our reality.In the cause of ‘manifesting’ a reality we desired, we were encouraged to ‘lock out’ negativity – to not hear, or speak or look at any ‘evil’.

In effect, we were encouraged to refuse to feel what we felt if it was at all dark and to purposely turn our thinking into more cheerful channels.

My first reaction was panic – because my innermost thoughts at that time were so dark, and so intensely did I feel this darkness, I couldn’t stop it.

‘Oh my god, what kind of reality am I creating?’ I thought, because no matter how I tried to stop it, the rage and despair wouldn’t stop. And the more desperately I asserted positive thoughts over how I felt, the more my mind mocked me, saying: ‘Why are you asserting all this positive stuff?… oh, that’s right, because you’re so utterly enraged and ruined …”

In effect, I became terrified of my own inner self as it was. How ridiculous – and how destructive, to be split in two like that, trying to assert conscious desires against who I was at that time.  Kind of like a psychic civil war. But that is what I attempted. And it only made things worse. The more I tried to assert a false culture of positivism over my negative landscape, the more depressed and angry I became.

It didn’t take me long to start looking elsewhere for solutions, a journey which eventually set me on the path to meditation. I realized this kind of desperate positivity is actually an insidious kind of emotional fascism, in which we’re encouraged to divide our inner world into ‘good’ and ‘bad’, then hunt down the ‘bad’ and try to kill it with the ‘good’. The inevitable result, as with fascism anywhere, is the ‘bad’ becomes empowered by our fear of it, and from secret places within, sabotages everything that’s ‘good’ in our lives.

What’s interesting to note is that almost all the people I met during that time who were adherents of positive thinking never realized the positive assertions they were so desperately trying to manifest for themselves. I meet them every so often, and they’re still mindlessly chanting affirmations and smiling through their angst – and still passing from seminar to seminar, guru to guru, who all basically peddle the same crap. And they still feel powerless and defeated while waiting for their visualizations affirmations to ‘work’.

Carl Jung, in a famous quote, had this to say about positive thinking in all its forms:

‘One does not become enlightened by imagining figures of light, but by making the darkness conscious.’

Which brings me to an interesting piece of research by psychologists Joanne Wood and John Lee from the University of Waterloo, which verified my own experience.

Recently, in experiments with positive affirmations:

So let’s sum up their results:

In a follow-up study, in which they focussed on low self esteem individuals, the researchers got half the participants to list only positive thoughts. The other half of the study had to list their negative self-thoughts alongside positive self-thoughts.

The results showed emphatically that low self-esteem participants who were allowed to acknowledge their negative self talk experienced more well-being those who had been directed to focus exclusively on their positive thoughts.

So, what does this have to do with meditation?

Well, when I first meet people who want to learn how to meditate I ask them, ‘Why do you want to meditate?’

Invariably their reply includes everything they want from meditation – to be relaxed, to be calm, to be free of anxiety or depression, to able to concentrate better and so on. The list of things people want from meditation is endless.And, for sure, I say, with most things, meditation can possibly help.

But then I give them the twist, which is:

In this you trust that the natural order of the universe is to seek balance – stillness. It’s a bit like a pendulum – if you’re constantly pushing a pendulum toward one side – the positive side, let’s say, it’s only natural the reverse reaction will keep occurring. But if you accept both sides of your Self equally and allow the pendulum to swing to both its extremities, without pushing it either way, it will eventually calm itself and go still.

Meditation is like letting go of the pendulum and allowing it to find its own equilibrium – we cause balance and stillness to happen simply by learning to accept everything as it is, while not reacting to it.

This is letting go. Non-reaction.

So if you’re using affirmations or visualizations to try to create some desired state – whether it’s calm, or happiness, or love or wealth or whatever, though you might well experience a soothing endorphin effect from your imagining, what you’re actually doing is pushing the pendulum – you’re empowering the opposite of what you’re desperately being positive about, by fearing it.

And how do we know you’re fearing it?

Well, ask yourself, why else would you be using affirmations or visualizations? Because you fear their opposite.

I’ll finish with a wonderful quote from a famous and enlightened Thai monk, Acharn Chah in which he uses the word ‘suffering’ as a generic term to describe everything we consider ‘negative’ in our life:

“If you want to understand suffering you must look into the suffering. The teachings say that wherever a problem arises it must be settled right there. Where suffering lies is right where non-suffering will arise. So if suffering arises you must contemplate it right there. You don’t have to run away. You should settle the issue right there. One who runs away from suffering out of fear is the most foolish person of all. He will simply increase his stupidity endlessly. Just know yourself, this is your witness. Don’t make decisions on the strength of your desires. Desires can puff us up into thinking we are something which we’re not. We must be very circumspect.”

Ultimately there is a profound irony inherent in meditation, and in life itself. And that is, the more we try to escape suffering – with drugs or comfort, or mis-use of meditation methods,  the stronger the suffering will become.

Similarly, the more we try to imagine our way out of suffering with positive thinking, affirmations or visualizations, the more likely it is that suffering will blindside us further up he track, and sabotage us from the secret places we have consigned it to.

So the trick, if you like, of meditation and life itself is:

Never run away. When suffering is present in any of its forms – as emotion, negative reaction or misfortune – turn to it and look into it as sensations. And as you pay attention to the sensations of how you feel, be aware of the story your mind is telling you, but don’t pay attention to it – let it fade away by not participating in it. In this way, you are not asserting the positive – so much as simply choosing not to participate in the negative.

Meditation trains us for this – because in meditation we practice accepting how we feel, while at the time letting go of our reactions to it.

And stillness comes on its own. 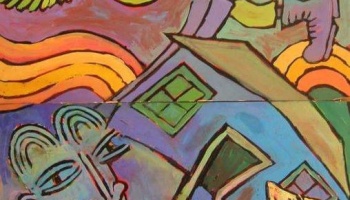 ← Our Forgotten Friend
Riding the Storm During Meditation →